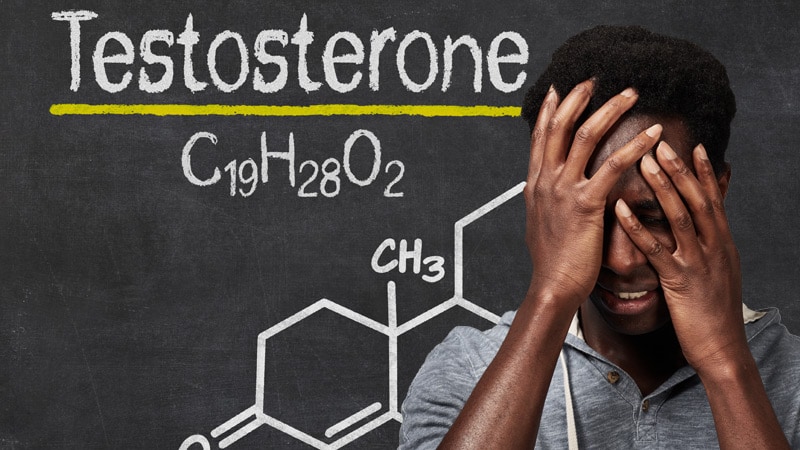 Research findings have been inconsistent regarding the use of testosterone to treat depression in men. A study suggests that at higher doses, it can be helpful for men with low depressive symptoms.

Investigators analyzed 27 randomized controlled trials (RCTs) that included almost 1900 men and found that those patients who were treated with testosterone were more than twice as likely to experience a reduction in depressive symptoms compared to their counterparts who received placebo.

The effect was particularly pronounced at higher doses.

Moreover, “although many possible influencing variables were investigated, the dosage and symptom variability were the only moderators identified — that is, when higher dosage regimens were administered and the men within the studies showed similar depressive burden in which all were very depressed or had only a low depressive burden, the effects were greater,” he said.

“Testosterone is a neuroactive hormone that influences numerous behavioral patterns, such as libido or aggression,” said Walther.

"However, it is believed that testosterone also has a positive effect on neuroplasticity and thus protects the brain through increased neuronal survival, making it more adaptable and better able to cope with depressive symptoms.

“It has long been discussed whether low testosterone levels in men are associated with increased depressive symptoms,” Walther noted, but “this association has only been observed in some subgroups of men, such as dysthymic or treatment-resistant depressive men,” he added.

Nevertheless, “there have been several studies that have attempted to apply testosterone to improve mood, but the results were very mixed [so we] wanted to compile all these findings to identify the true effect of testosterone in depressive symptoms in men.”

To investigate the question, the researchers analyzed 27 RCTs (n = 1890 men), chosen via a stepwise process of elimination from 7690 identified records.
To qualify for inclusion, a study was required to employ an RCT design in which testosterone was administered to patients who reported on mood both before and after the intervention.

Moreover, these effects exceed the efficacy thresholds for pharmacotherapies for depression proposed by the National Institute for Health and Care Excellence (NICE) guidelines, in which a reduction of 3.0 and 2.0 points is considered to be clinically significant for normal depression and treatment-resistant depression, respectively.

Although the effects do not exceed the NICE guideline regarding treatment-responsive depression, they are comparable to reported efficacy measures of current antidepressants, the authors note.
In many of the analyzed studies, testosterone served as an adjunct medication, which would “support the incremental clinical utility of testosterone treatment in the absence of small-study effects,” they add.

There were no statistically significant differences in risk of attrition when participants received testosterone vs placebo (odds ratio, 0.79; 95% CI, 0.61 - 1.01).

The researchers expressed concern about bias in the studies analyzed. The investigators’ risk-of-bias assessment revealed that “few” RCTs were at low risk for bias, primarily owing to a lack of details about randomization procedures, as well as allocation concealment and incomplete outcome measures.

On the other hand, with regard to treatment effectiveness, the portion of true heterogeneity was estimated to amount to an I 2 of 18.7% of the total effect variability (τ, 0.11; χ2 25 = 31.20; P = .18) — a finding that is “comparable to other meta-analyses on pharmacologic treatment of mental health outcomes.”

Meta-regression analysis revealed that testosterone dosage and lower symptom variability at baseline could have moderated the testosterone treatment–related difference in posttreatment depressive symptoms.

However, “by contrast, the analyses provided little evidence for a pronounced association with age, baseline testosterone level, depression status, HIV infection, treatment duration, and the route of testosterone administration,” the investigators write.

Despite these encouraging findings, “it is important to note that the studies are very heterogeneous, and some of them also have a high risk of bias. Therefore, the findings must be interpreted carefully, and a need for more high-quality randomized controlled trials to examine primary depressive symptoms is needed,” Walther cautioned.

Commenting on the study for Medscape Medical News, Harrison G. Pope Jr, MD, professor of psychiatry, Harvard Medical School, Boston, Massachusetts, and director, Biological Psychiatry Laboratory, McLean Hospital, Belmont, Massachusetts, who was not involved with the research, said that there is a “great deal of background noise in this picture, in terms of the data.”
Although it is “likely true that, on average, testosterone has some weak antidepressant effects. It is difficult to draw much further conclusions about who to treat, when to treat, and how much to use,” he said.

He noted that the “weak antidepressant effect is probably effective in certain subgroups of people — perhaps in those with mild chronic depression rather than full-scale depressive illness, where symptoms come on more abruptly.”

In addition, the researchers state that testosterone treatment remains significant when a dose greater than 500 mg/week is administered.

“The natural male testis produces only about 50 to 75 mg/week. Thus, this dose is much greater than what an ordinary endocrinologist would administer when treating hypogonadism and even more than the range used by illicit anabolic steroid users and body builders trying to gain muscle mass,” he said.

He was therefore “surprised” that “anyone would consider these dosages because, when you get into that range, the potential dangers of testosterone begin to increase.”

The authors of an accompanying editorial similarly state that the “available data do not support the use of testosterone treatment, especially in supraphysiologic doses, for the treatment of depressive disorders in men.”
The editorialists advise clinicians to follow the Endocrine Society clinical practice guideline for testosterone replacement therapy of androgen-deficient men.

These guidelines do not recommend testosterone therapy for treating depressive symptoms.

Walther acknowledged that it is “important for clinicians to know that it is not yet time to prescribe testosterone to men with elevated depressive symptoms [because] more research on this and the safety of testosterone treatment is needed.”
However, “if these studies continue to support the findings and the risks are shown to be low, testosterone could be used as an adjunct treatment in the treatment of depressive disorders in specific groups of men.”

No source of funding for the study has been reported. Dr Walther and coauthors have disclosed no relevant financial relationships. Dr Pope received funding from the National Institute on Drug Abuse for studies of long-term effects of high-dose anabolic steroids on the nervous system. Relevant financial relationships of the editorialists are listed on the original article.

I will say, higher levels of tests usually completely keeps any depressive thoughts away. As well as any nandros.

I believe that this is true we all have gone through pct and I have experienced depression while shutdown and I have seen some people really go through a tough time during this period when there testosterone is next to nothing.
I don’t know if using testosterone as an antidepressant would work for everyone but just like all medications it will work for some but maybe not others.
Nice read

3 Likes
Any communication between a site sponsor or source is strictly between the member and source directly. Please check the laws of your country before you order any of their products. The onus is on the buyer, and the sponsor nor UGMuscle.com will not be responsible in any way if you break the laws of where you live.